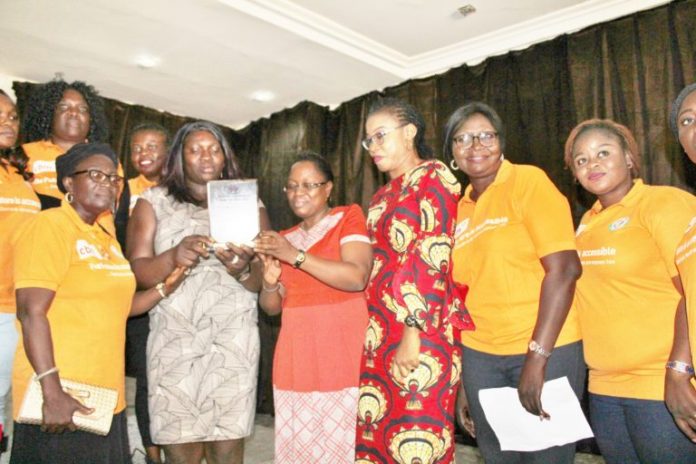 Deaf Women Association of Nigeria (DWAN) Abuja Chapter on Thursday 5th December, 2019 organized her 6th edition of Deaf women Health Awareness week & International Day for persons with disabilities with the theme: The Future is Accessible and sub theme: Count Us In, we are Women Too.

The Chairperson of the association, Mrs. Helen Beyioku-Alase speaking at the event appreciated the commitment of the Executive Secretary of FCT Health & Human services for approving the training of health workers in sign language. The training if sustained, would go a long way towards breaking the barriers of communication the deaf women faced in the hospital. It is a known fact that when it comes to sexual reproductive health, deaf women don’t get adequate information. The confidentiality that supposed to exist between the health care provider and the patients, inadequate sign language in the hospitals has made it practical impossible, sign language interpreter is already a third party.

She called on FCT Health and Human services to extend the sign language training to more hospitals and possibly cover all the health practitioners working in FCT owned hospitals. “It will be the catalyst that will completely remove the communication barrier faced by deaf people especially deaf women in Nigeria”. She said

The representative of the Executive Secretary, Mrs Bukola Azeez, the Assistant Director (PPP) FCT- HEALTH speaking at the event said that they are committed towards implementation of the issues raised by Deaf women. She further assured that the association would be involved in a health-related policy formulation process in the FCT.

Lawrence Idemudia during his goodwill message applauded the DWAN for making it possible for deaf people access healthcare without third party. He called on people to support DWAN because they are working for the good of deaf women and girls.

Ikalone Udo, a life coach and one of the partners of DWAN, pledged to support DWAN all the way to ensure that DWAN achieved all its set objectives. She called on those who have hiding deaf people in their houses to allow them explore the opportunity and also work with other deaf people to achieve great things.

The Women leader, JONAPWD, FCT Betty Mube spoke on unity in the struggle of Deaf women describing them as the best within the disability community because it was the co-operation with the leader that made it possible for them to achieve the much they have achieved, having health workers trained on sign language and employment of sign language interpreters, she called on the DPOs to work together to achieve much more.

DWAN FCT appreciated the Executive Secretary of FCT Health with an award for supporting Deaf women all the way to ensure that communication is enhanced within the hospitals in the FCT. Responding on the award, Mrs. Azeez expressed joy over the award gave to her boss and said that it is a motivation to do more and promise that the secretariat will be with DWAN FCT in all their project next year.

DWAN FCT also honoured Dorothy Njamanze with an award for carrying along deaf community in all her sexual/gender-based violence documentaries but she was absent to receive the award.

INN gathers that the event which was supported by CBM and partnership Marie Stopes Nigeria was well attended by Deaf Community including the National President DWAN.

The Executive Secretary of FCT Health and Human Services donated some gifts of drugs for women to DWAN FCT.