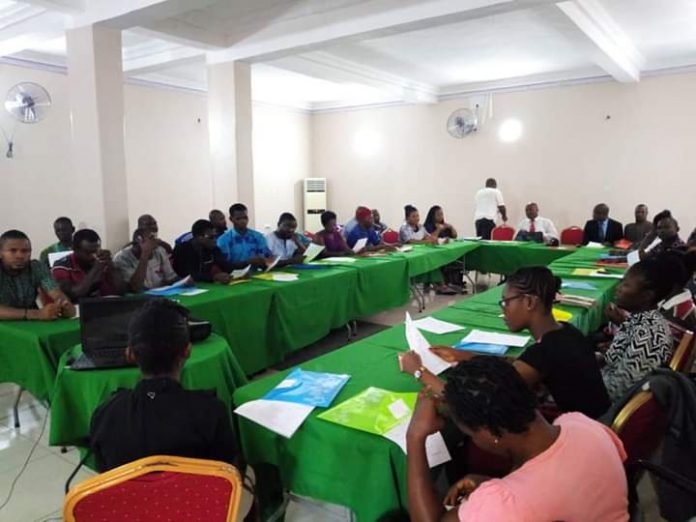 A nonprofit organization, Centre for Citizens with Disabilities, CCD, has appealed to Akwa Ibom state government to enact and implement the Disability Law.  The Executive Director CCD, Mr. David Anyaele made the appeal yesterday in Uyo, Akwa Ibom state during a two-day symposium organised to commemorate the 2019 disability week to sensitize Persons With Disabilities (PWDs) in the state to key into the fight against corruption.

Represented by Mrs.Peace Ezekiel, staff of CCD, Anyaele who stressed the need to ensure that all states in the country implmented the Law however, regretted that in the entire South east region only Anambra state has done so. His words,  “This is the first time we are celebrating Persons with Disabilities week in Nigeria with the National Disability Act as theme, and we say a big thank you to President Muhammadu Buhari for this. “Looking at the National Disability Act,  in Akwa Ibom, we are not there yet, so I think we need to come out, and push to see how we can enact this Disability Law in Akwa Ibom. Other states have it but in the whole of South east we only have it in Anambra state, that is a shame”

In his remarks, programme officer of CCD, Mr. Muazu, Musa said besides advocating for implementation of the Disability law in allthe states, that the organization was working with ActionAid to under the Strengthening Citizens Resistance against Prevalence of Corruption, (SCRAP-C) to sensitize PWDs in 5 states including Akwa Ibom on the need for them to resist all forms of corruption. Musa who noted that best thing states could do to PWDs was to give them that Law, added, “That is why we are bringing this campaign to Akwa Ibom and other states that do not have this law, or those that have it but have not yet implemented it” The Commissioner, Independent Corrupt Practices and other Related Offences Commission, (ICPC), Akwa Ibom state Mr. Sola Shodipo represented by the Legal Officer Mr. Kalu Ugbo, in his keynote speech, blamed the high level of corruption in the country on leadership. The ICPC boss who noted that Nigeria is more than blessed with mineral resources stressed “If these minineral resources are tapped, Nigeria may not need oil again, there will be no militancy in the creeks . “But what are we lacking is leadership; upright, transparent, accountable leadership. That is what we need in Nigeria. And I believe that when people with disabilities stand up against corruption, everybody will sit up. Corruption has really dealt so much blow to Nigeria and the citizens” In his brief remarks,  Commissioner, Ministry of Science and Technology, Dr. Iniobong Essien in a keynote address commended CCD  for their effort in educating, supporting, and empowering persons with disabilities and their families to maximize their potentials. “The right to participate in public life is essential to create stable democracies, active citizenship and reduce inequalities in society”, he said.