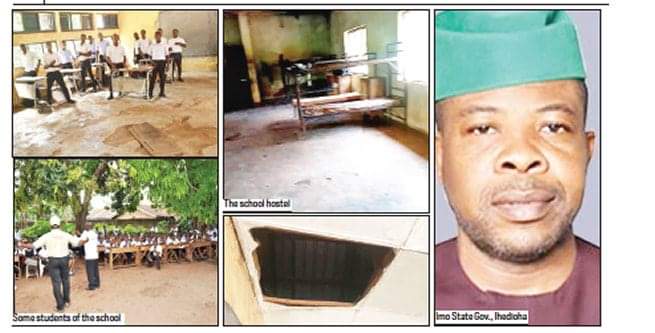 Life and mutual co-existence is all about communication. For the deaf and hard of hearing, it is not a very easy life.

It becomes more complicated when everyday needs and essentials of life are lacking or are in poor supply.

Some of these ugly realities have forced not a few deaf persons into begging and total dependence on charity.

Yet, there are some who have resolved to earn their keep and pay their bills through educating themselves. Yet, unbelievable odds and banana peels are strewn on their paths.

In most cases, they are treated like non-members of the society or an inconsequential minority.

The School for the Deaf, Orodo in Mbaitoli council area of Imo State is the only government owned institution for the deaf in Imo State and the second in the entire South-East of Nigeria.

Deaf boys and girls from Imo State, the South-East and beyond converge at this school to acquire learning and skills for productive living.

The present state of the School for the Deaf, Orodo is a sad commentary on the dignity of human life and our sensitivity to issues of human interest.

Infrastructure is dilapidated, learning standard is falling due to inadequate teachers in relevant fields, sanitation is utterly deplorable, no health facility for the students and the issues of security nags at the mind of every resident of the school.

Commenting on the state of the school, the Principal, Ogoke Felicia, said: “There are multifarious challenges in the school. The dormitories are in deplorable state with students sleeping in literally open halls – dormitories without windows or doors – most sleep on bare bed springs without foams. Teachers are inadequate. The teachers we have do not have any quarters to live in. In spite of all these undue exposure to health challenges, there is no health facility for students in the school with most resorting to self medication.”

Ogoke further noted that the school has serious issues of security as hoodlums often invade the school through the fence; they rape, rob female students and steal school properties at will.

She continued: “We are deficient in teaching strength. We have no teacher in Mathematics and Basic Science; we have inadequate special teachers. Presently, there are 13 teachers with only 6 of them being special educators. The school faces serious challenges during external examinations because some key subjects are not taught or offered in the school due to lack of teaching staff.”

Ogoke regretted however that some parents had literally dumped their deaf children on the school.

“It is more like these parents bring their wards to the school, dump them on us and abandon them. Some do not even ask about the welfare of their wards for more than two terms and they do not care because they do not even send any support to them even as little as provisions and daily needs of the students”, Ogoke said.

The Principal also noted that government is responsible for the feeding of the students but regretted that the feeding was terribly too poor for young pupils and young adults in the school.

Peace Dike of Virgin Heart Foundation, who had visited the school, said their food was worth less than N100 a plate, demanding that urgent government intervention was needed to save the students from life-threatening maladies.

Martin Ibeh, a teacher in the school, added that under normal special education system, students are expected to be between 10-15 in a classroom but here, they are up to 50 in a classroom.

“We have a student population of 300 spread across six classrooms from primary to secondary school.”

On the rape of female students, Ibeh said such cases are treated within the school, as no one is ready to help them fight for justice for the rape victims given the money-driven justice system.

“There is so little we can do for the rape victim and the rapists seem to know that and are perhaps emboldened to sustain their onslaught on our female students without fear of consequences. Until the school has a fully secure perimeter fence with security personnel detailed on routine basis to the school, some of these excesses of hoodlums may not end”, she said.

Peter Ugochukwu, an old teacher, who accidentally lost his hearing at a hospital after his Secondary School, said the school was founded in 1984. He is a Masters Degree holder and teaches English, Literature through sign language and had taught for 25 years.

He said the school was in urgent need of specially trained sign teachers, who are passionate and committed to building the students of the school to favourably compete with other students across the divide.

The Director, Virgin Heart Foundation, Peace Dike, called on the government, Ministry of Gender and Vulnerable People, charitable organizations and faith-based group to make urgent interventions in the School for the Deaf, Orodo.

“Beside the urgent need for special teachers and instructors, the hostels, classrooms and teachers’ quarters’ needs to be renovated or rebuilt as the case may be”, she said.

On the issue of security, Dike expressed grave concern that female students at the school were still exposed and vulnerable to rape and assault by the rampaging hoodlums, if nothing was done to effectively secure the school.

She regretted that the thick forest surrounding parts of the school gave sufficient cover for hoodlums to scale the fence and sneak into the school and attack the female students and any other person as the case may be. She urged government to establish a lot more presence in the school; and once again restore confidence and quality of living and education at the School for the Deaf, Orodo, Imo State.(New telegraph)