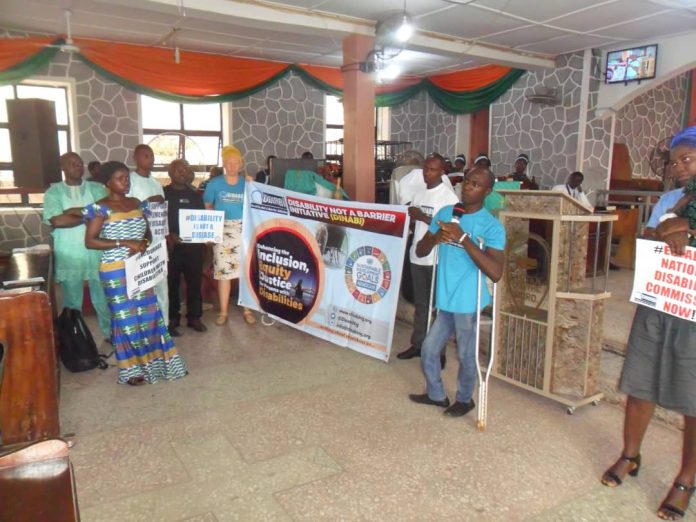 The campaign which was aimed at increasing the awareness of parents and guardians of children with disabilities on the need not to hide their children indoor any longer but allow them to get required education and live a purposeful life and also to tutor parents and guardian of children with disabilities on the best way of taking care of them. The campaign was supported by Brilliant Minds Academy, Ado-Ekiti.

The 470-capacity church auditorium which was almost filled to the brim rose with applause as the Executive Director of the organisation, Olajide Funso, was called forward to sensitize the congregation.

He urged such parents/guardians to emulate him and other members of the team who are all graduates and doing well in life.

He also encouraged the parents/guardians to always watch what and how they address their children with disabilities. He admonished them to instil courage in them, set targets for them, make research on their type of disability, consult groups/association of persons with disabilities and also tell and show them stories of people with disabilities who have made it in life.

Olajide further urged the pastorate and members of the congregation to speak up for persons with disabilities most especially on their rights as a member of the society and the need to implement the Disability Acts.

In his response, the senior pastor of the church, Ven. Deji Alabi appreciated the team from DINABI for counting their church worthy of such laudable programme stating that he was proud to associate with the organisation.

He promised to carry the message to the nooks and crannies of the world and to speak up for “the people with special abilities”. He urged the congregation not to hide kids with disabilities at home any longer; rather, they should look at the team from DINABI as an example worthy of emulation.

In her sermon titled “The Purpose of God for Man”, Pastor (Mrs) Oyindamola urged the congregation to move closer to God irrespective of their disabilities so as to fulfil God’s purpose for their lives.
At the end of the event, the church through Ven. Alabi promised to empower some persons with disabilities among those whom DINABI had trained in skill acquisition in the past but with no financial capacity to start their own business. DINABI Team also donated snacks to the children in the church.

Convention On The Rights Of Persons With Disabilities Is The Key...