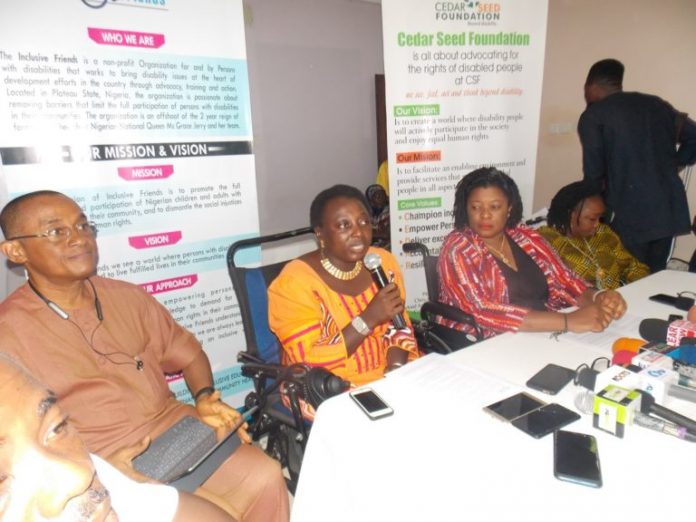 A Coalition of Civil Society Organizations were yesterday, 1st November, 2019 in a press conference and roundtable discussion to speak on “the insensitivity and ill-treatment of Airlines toward persons with disabilities in Nigeria”. The press conference was organised to bare out their ugly experiences in the hands of airline operators in Nigeria.

Speaking to the press on Friday, Inclusive Friends Association (IFA) Executive Director, Grace Jerry said “Over the years, persons with disabilities have had to cope with a great deal of inconveniences and discomfort as passengers with disabilities from boarding to disembarking. The isle to the seats in the plane is not designed to accommodate wheelchairs/reduced mobility. As a result, the movement of the persons with disabilities while on board is forcefully restricted. PWDs are allowed to board first but they are forced to alight after all other passengers regardless of how urgent the need may be and also there is wrong notion by airline operatives that electric wheelchairs batteries are explosive and as such, they don’t allow passengers with disabilities who uses electric wheelchairs to board. Most times, in handling these wheelchairs, airline attendants have mistakenly or carelessly damaged the wheelchairs.”

She narrated her recent ordeal with Air Peace where she flew in from Lagos to Abuja disembarked and the flight flew back immediately to Lagos with her wheelchair. When she asked for her wheelchair, she was told to wait till 10pm before she can get back her wheelchair and they left her and went about their business. She was there for hours before she started creating scene before they gave her old and rusty wheelchair to go home with and promised to get across her wheelchair as soon as the flight returns.

She added that a taxi driver brought her wheelchair the following day around 10am and he was visibly angry with her because he couldn’t locate her address easily, he simply told her that the airline sent him to deliver her wheelchair and collect theirs in her possession. She asked if there is any message from them and the taxi said that he was asked to bring back the wheelchair. No apology from the airline for the inconvenience caused by their carelessness.

Grace further said “the passengers with disabilities pay the same air ticket fee like others, why are they treating PWDs different. There are video evidences of where PWDs are being carried like log of woods into the aircraft. Imagine a woman with disability being carried mostly by men, they will carry her upper body and her legs, their hands will be on her breast pressing them and if she is not on trousers, her private part will be exposed for all to see and at times, the way they will carry the person, the person will sustain some bodily injuries. By the time, the person is taken into the flight, other passengers will be saying things like sorry, it is well, imagine the phycological trauma the person will be going through. Meanwhile these airline operators still collect money from these passengers with disabilities before they will accept to carry them. What stops the airlines to be reasonable to make provision so PWDs can board without any assistance?”

Cedar Seeds Foundation Executive Director, Lois Auta shared her experiences when she was travelling in 2017 as Mandela Fellowship Award nominee, she narrated how she was left in Ethiopia airport by Ethiopian Air pilot because she was not travelling with an aid as she was to board to a connecting flight from Ethiopia to Argentina before connecting to USA. It brought addition expenses for her, she had to lounge and wait till the next day to continue her journey, what if she doesn’t have enough money to lounge, the act made her to miss the first day of her meeting.

She added “It is important to note that it is a right for PWDs to have access to public infrastructures (article 9 of CRPD), the 2019 theme for International Day for Persons with disabilities is the future is accessible which implies that accessibility is the greatest challenge faced by persons with disabilities and if it is resolved, it will definitely dignify PWDs.”

Donald Unaka, a person with physical disability, narrated how airline refused him boarding because they don’t have people who can carry him as he was traveling to Accra for British council organized exhibition, he pleaded with them to allow him crawl to the aircraft to meet up with the opening ceremony but they still refused. He had to wait till next day to board another flight but the airline that refused to carry him didn’t even refund him till date. On his way back, he encountered another problem when he boarded Air peace and paid 20 dollars for those that will carry him into the aircraft but on getting to the boarding place, the operators asked him for money to carry him in, he told them that he has paid for this service but it seems it didn’t go down well with them, they were delaying until he had to crawl into the aircraft and his 20 dollars was not refunded to him.

Patience Ogolo-Dickson, the executive director of AWWDI narrated how some airline operators will ask her if she has a terminal disease just because she is on a wheelchair. She informed that it is the rights of PWDs to travel to any part of the world and a lot of PWDs are now into developmental work so they should be travelling and they should not be subjected into a form of discrimination.

Barrister Florence Marcos, a lawyer with amputee who shared her life experience narrated that in 2014, Ethiopian Airline subjected her into series of medical test because she is an amputee as if she has a terminal disease. She had to spend over 20 thousand naira not the cost of her air ticket and other expenses and on her way back because she only traveled to acquire her prosthetic, they demanded another series of medical test. She had to argue it out with them and what aided her argument was that the prosthetic manufacturer has issued a clearance that she can travel.

Mr. Godwin Ike, Aviation Researcher and Publisher, gave an insight that the airlines are misbehaving because they are only mandated to pay compensations to cases of death, injuries and loss of baggage not people’s ill maltreatment and feelings. The Aviation law is controlled internationally by ICAO in Canada, they make laws for aviation industry and countries are signatory to them and it supersedes the member countries laws on aviation. He reminded that disability issues should be everybody’s business because there is a thin line between being able and being disabled. He regrets that if ICAO convention was not properly scrutinized by Nigeria to ensure that it contains sections that will protect PWDs from harmful practices before signing, ICAO would have listened and these problems would have not been there. He used the opportunity to call on the Minister of Aviation to take this message from PWDs to ICAO to include a section that address the ill treatment of PWDs by airlines. He advised the PWDs to collaborate with other PWDs across Africa who are facing the same challenges to reach ICAO and he believes ICAO will listen.

The group made some recommendations to the airlines to help put an end to the ill treatment PWDs are facing in the airports. The group calls on all local and international airlines in Nigeria to provide the following:

“All local and international airlines must provide LIFT TRUSKs to board PWDs into the aircraft, and provide same when disembarking.”

“All local airlines must provide Isle Chairs to convey PWDs especially those on wheelchairs to the seats on board.”

“All airlines that have discriminated or subjected PWDs to ill treatments must offer an apology to Nigerians with disabilities in both mainstream and social media platforms.”

“All passenger assistance services in Nigeria should Never be paid for by person needing assistance to board (PWDs, Medical reasons and the Elderly). It should be declared in ALL AIRPORTS and ALL AIRLINES in NIGERIA.”

“Airport Authorities should scan personal wheelchairs but allow clients to use their chairs until they board as those are extensions of body function.”

“All airlines operating in NIGERIA must produce a technical directive for managing PWDs and passengers needing assistance as part of their official procedures. In addition, this directive cannot be made all PWDs cluster inputs.”

“All airports and airline official MUST be trained to handle Assistive travel including using the right terms, carrying procedures etc. Technical assistance can be provided for this by organization of persons with disabilities (OPDs).”

“There should be overhaul of rusty and rickety airport wheelchairs, throw some of them away, they are old and bad, some don’t have breaks either.”

“Airlines need to strengthen and synergize their communication system by way of connecting staff, captain & crew members. There seem to be a disconnect from the bookings, to the desk and the cabin crew members attending to PWDs.”

The group threatened to litigate against any airline who go ahead to maltreat, discriminate or marginalize any PWDs in Nigeria.Group threatens legal against ill treatment of persons with disabilities by Airlines.