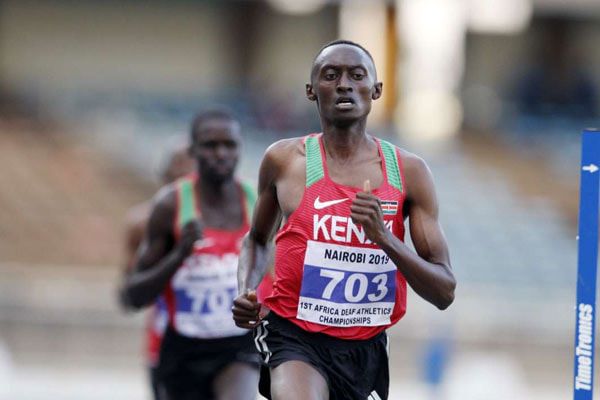 World Junior 200m deaf record holder Beryl Wamira delighted a handful of supporters at the stadium when she put-off a stiff competition to win gold in women’s 200m in 26:17.

It was the second gold medal for the 24-year-old runner who gave Kenya her first gold medal of the competition on Tuesday when she won the women’s 100m finals in 12:87. The junior 200m world record, which she set during the 22nd Deaf Olympic Games held in Sofia, Bulgaria, in 2013 stands at 24:46.

It was a sweep for Kenya in the race as Linet Wanjala and Ruth Awuor emerged second and third in 27:01 and 27:09 respectively. “I’m very happy to win gold medal in the two short races because they are my areas specialisation. It is what I wanted to achieve in this competition,” said Wamira.

Her brother, David, was not left out in the medal category, as he bagged gold in men’s 200m final in 22:81, ahead of Uche Nwabene of Nigeria and Kenya’s Walter Malenje who clocked 22:94 and 23:04 respectively. Kenya’s party continued in the men’s 800m final where John Koech led from the start to finish in 1 minute and 57seconds. He beat compatriot Francis Rondi who timed 1:58, while Algerian Didone emerged third in 2:01.

In the 5,000m men’s final, Brhane Yemane ran a tactical race to win Ethiopia’s first gold medal in the competition. After staying behind the leading pack of two Kenyans Martin Gachie and Kokobi Omari until the final lap, Yemane outpaced the field to win in 14 minutes and 54seconds. Gauche – who led the pack until the final lap – finished a distance second in 15:03, ahead of Omari who clocked 15:13.

“I am very happy, the race was difficult because I was alone against four Kenyans. I fought hard to remain with them in the leading pack after which I sensed victory in the final lap and decided to go for victory,” said Yemane.

In the day one events held Tuesday, Kenya triumphed in the men’s 10,000m, sweeping all the podium places.

Martin Gache led his colleagues Peter Toroitich and Amos Kiplagat in dominating the track to scoop gold, silver and bronze in 31 minutes and 15 seconds, 31:53 and 33:05 respectively. The trio’s only competitor in the race was Algerian Guendouz Yahia who came fourth in 37:23. Other gold medal winners for Kenya on day one of the competition are Isaac Atima – who timed 56:4 in the men’s 400m hurdles and Benjamin Kimitei who managed a throw of 25.80m in the discus competition.