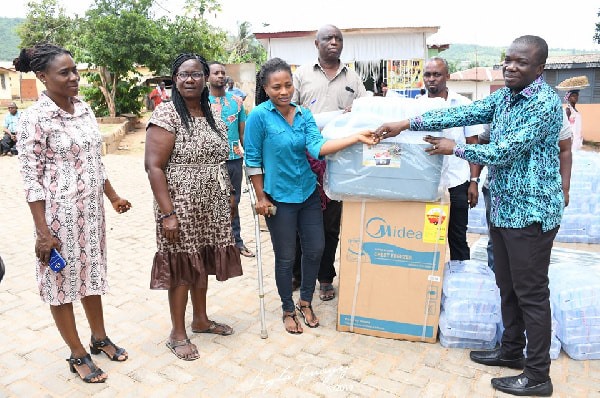 At least 24 persons living with disabilities on Friday, August 23rd, 2019 formed the fifth batch of beneficiaries who received life-sustaining aids from Municipal Chief Executive (MCE) of lower manya krobo at a ceremony at the premises of the municipal assembly, bringing the total number of beneficiaries to 134.

The MCE presented the assorted items valued at thousands of cedis to Persons With Disabilities in the area.

Mr. Simon Tetteh said the donation was part of the District Assemblies Fund and his outfit would continue with the effort adding that his outfit will continue to monitor the recipients to see if they are making good of the items.

The assembly chief reiterated government’s intention to provide sources of livelihood for and economically empower the vulnerable in society including persons living with disabilities, irrespective of political affiliations.

Though government may not be able to meet all requests of members, the MCE said government was nevertheless committed to providing the exact requests of PWDs and assured other Persons With Disabilities in the municipal to exercise patience as they await their turn.

Simon Kweku Tetteh while underscoring the capacities of PWDs to work just as able-bodied persons was hopeful that the programme would soon cover the about 900 PWDs in the municipal to permanently erase the age-long phenomenon of they soliciting for alms to survive while boosting the local economy.

The assembly chief who expressed satisfaction at progresses made by previous beneficiaries during his monitoring also tasked the current recipients to put the items received to good use as monitoring teams from various bodies including the ministry of local government, the common fund administration and the local assembly would be embarking on periodic monitoring activities to ascertain the progress of their businesses.

He also noted that henceforth, distributions to persons living with disabilities will be done in various communities in the municipal.

Mrs. Naa Akuyie Ofosu, Head of Department of Social Welfare In Community Development at the assembly while urging the delegates to put the items to good use to get the desired benefits congratulated the disability fund management (FMC) committee which she said meets regularly to assess requests from people living with disabilities and the funds available.

The committee which comprises of the president of the President of the Ghana Federation of Disability Organizations, the blind union, the accounts department and the social services subcommittee chairperson, meets to assess requests and the funds available where the committee subsequently looks for suppliers to supply the items based on the decision taken at the FMC.

President of the Ghana Federation of Disability Organizations in Lower Manya Krobo, Mr. Isaac Partey expressed his appreciation for the items and described the gesture as a marked improvement over previous distributions.

Mr. Paretey who was grateful that they were “not being given fish but rather being taught to fish for themselves” urged the beneficiaries to put the items to good use to economically empower themselves to ensure the sustenance of their respective businesses.

He promised to ensure that his members sustain the businesses so as not to put the assembly to shame when monitors visit but rather prove that the assistance has been worth it.

Other beneficiaries also expressed contentment at the items and thanked the MCE and government for the gesture.

You Empowered Our Community, PWDs Celebrate Fashola At 57