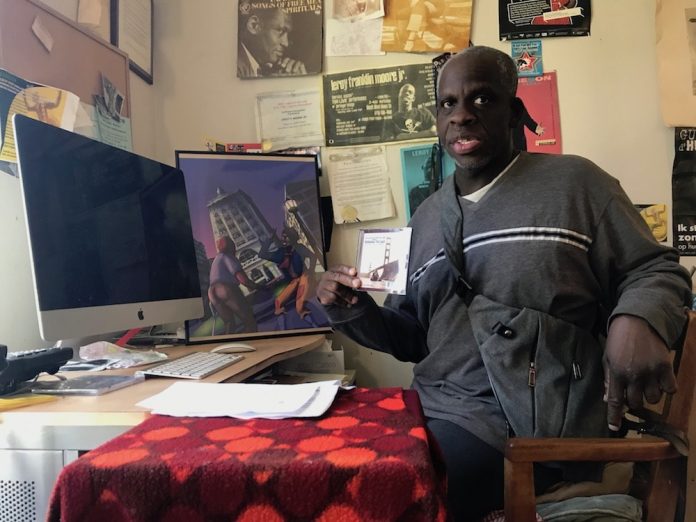 Leroy Moore, who has been an activist for black artists with disabilities since the 1990s, uses his music and writing to share the experience of being a black, disabled man. He himself has cerebral palsy.

“Being profiled by the police constantly, especially in Berkeley, makes it into my music,” Moore said in an interview at his apartment. Moore cites wrongful incarcerations of people of color with disabilities, as well as wrongful evictions of elderly disabled people, as subjects that inspire his music.

Now Moore, with his organization Krip-Hop Nation, an international network of musicians with disabilities that aims to combat the ableist nature of popular rap music, is bringing the Disabled African Musicians to the Ed Roberts Campus in Berkeley.

The tour stops there on one Tuesday and features artists with disabilities from Zimbabwe, the Democratic Republic of Congo, Uganda, Tanzania and South Africa. Featured artists include Francine Atosha Mbusa Lusumba Luc of the Congo and Archy Nathaniel Gomba of Tanzania.

Moore promises it will be an exciting showcase of a variety of music and art, including traditional African music, as well as gospel and hip-hop. There are further dates in both Berkeley and Oakland.

Krip-Hop Nation originally launched on Myspace in 2007, and Moore says it blew up overnight, quickly attracting international news coverage. As well as music, the organization promotes digital art, radio and journalism surrounding the struggle and beauty of living with a disability.

Krip-Hop Nation also offers workshops that educate the public about issues in the disabled community.

Moore, who currently has an exhibit of commissioned art on display at the UCSF Benioff Children’s Hospital Oakland, will perform at the festival, playing music from his upcoming album, “Bridging The Gap: African Musicians with/without Disabilities.”

He will also premier a documentary entitled Blind Joe, a film about the life and untimely death of a musician and producer called Joe Capers. Moore’s graphic novel about a young disabled woman, who plays a superhero role and brings disabled people justice through hip-hop, is available through Poor Magazine’s website.