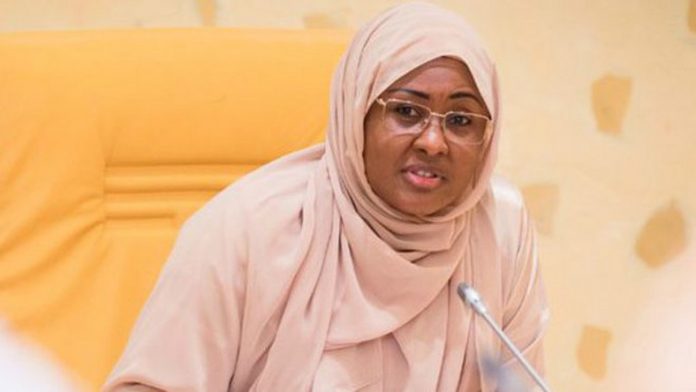 The First Lady, Mrs. Aisha Buhari, took to her Twitter handle to condemn the alleged sexual assault of some blind female students by their teachers in FCT School for the Blind, Jabi.

She, however, commended the prompt action of the FCT Permanent Secretary, Sir Christian Ohaa, over the indefinite suspension slammed on two teachers of the FCT School for the Blind, Jabi, who allegedly accused of sexual assault and molestation of some blind female students of the school.

Aisha Buhari, following a story on ITV social media platform, in her Twitter handle #Say No To Rape” described the alleged action of the two teachers as disheartening, just as she demanded Justice to be served.

In her words, “This is disheartening, justice must be served, thanks to Perm. Sec FCT for swinging into action, rape shouldn’t be taken lightly”.

It could be recalled that the FCTA Permanent Secretary, Sir Christian Ohaa, who made an unscheduled visit to the school following reports of incidences of sexual harassment of some female students by teachers, directed the immediate suspension of Mr. Ilo Chukwuma and Ebenezer Olateju, pending the conclusion of investigations on the matter.

Ohaa also directed that Chukwuma, who was accommodated in the school residential quarters, vacate the school within the week, stressing that both teachers should stay clear of the school premises as investigations continue.

He further directed the Director of Security Services in the FCTA, Mr. Adamu Gwary to ensure full compliance and implementation of the directive.

According to him, “While we are working round the clock to give every physically challenged student the best of education, we cannot have incidences as this to mar our progress and achievements.

“But let me assure parents that, anyone found culpable in any of these incidences, not only in this school, will be dismissed and prosecuted. Our teachers, like Caesars’ wife, must be above board.

“We cannot allow this kind of behavior to continue. These children more or less are helpless and they depend on teachers here. They have confidence and trust in you, that you will protect them from immorality and even outside invasion and you turn now to be the person they are now afraid of. As a government, we cannot just fold our arms”. (Daily Independent)