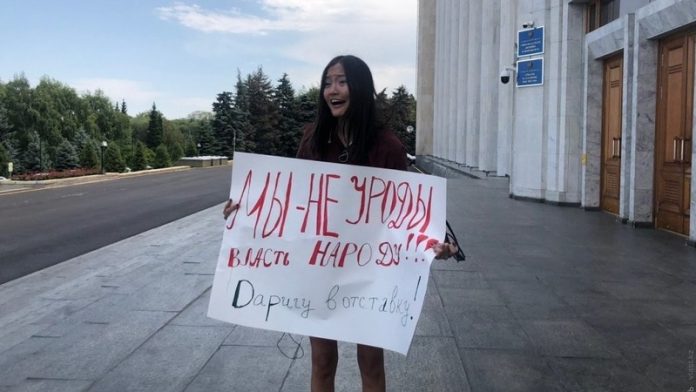 Kazakh police on Tuesday detained a woman with cerebral palsy as she protested against the daughter of former strongman Nursultan Nazarbayev for calling people with disabilities “freaks”, local media reported.

The slogans referred to comments by Senate Speaker Dariga Nazarbayeva, the daughter of the long-serving former president of the Central Asian country.

Almaty police could not immediately be reached for comment.

Photos posted on social media showed Shokanova holding a placard saying “We are not freaks! Power to the people! Dariga, resign!”

She suggested that sending teenagers with disabilities to state-run residential homes was a good way to stop them having a sex life.

Nazarbayeva was an MP at the time but now leads the Senate and is constitutionally second in line to President Kassym-Jomart Tokayev.

Tokayev, 66, became president after 79-year-old Nazarbayev shocked Kazakhs in March by resigning the office he had held for nearly three decades.

Nazarbayev retains the lifelong title of Kazakhstan’s “Leader of the Nation” as well as chairing the powerful security council.

Some regime opponents have suggested that Tokayev is a stop-gap figure and predict that Dariga Nazarbayeva — the eldest of Nazarbayev’s three daughters — will ascend to the presidency while her father is alive.