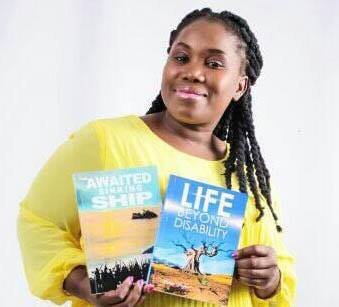 “People are not hindered by their physical disabilities, but are slaves of their emotional and mental disabilities” are the words of 35-year-old Nolwazi Khuzwayo, who is originally from Umzumbe on the South Coast of KZN, South Africa.

Nolwazi was born with a hearing disability and has had to depend on a hearing aid all her life. Her left ear is partially deaf and right ear completely deaf.Her trials and tribulations in life were compounded when both her parents became disabled. Her father died in 2003 as a wheelchair-bound parent following a car accident and her mother was declared partially blind after suffering from an eye condition that was not diagnosed.

She was in Ladysmith recently, where she spoke on a local radio station to inspire and motivate people with disabilities. However, she sees emotional disabilities (which affect everyone) as being much more debilitating than any physical handicap.

Nolwazi is a published author of two insightful books. Her first book, ‘Life Beyond Disability’, was launched in October 2015 and she recently wrote a second book entitled ‘The Awaited Sinking Ship’.

Nolwazi learned to overcome her disability and is now a true inspiration to many people through her books and also the motivational speeches she gives.

Nolwazi Khuzwayo is a published author of 2 insightful books.(Sindiswa Buthelezi)