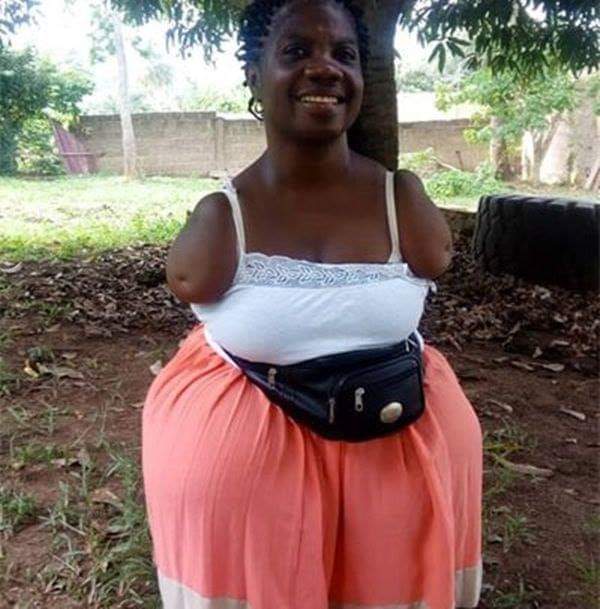 Despite being physically challenged with no arms to facilitate her daily routine, a teacher has become an inspiration to people after a photo of her holding a chalk with her lips to write on a board went viral.

Madam Enyonam, a teacher at Adoagyiri R/C school in Kasoa, has reinforced the narrative that disability is not inability after a photo of her holding a chalk with her lips to write and teach school pupils went viral in 2018.

A recent photo of the teacher with a felt-tip pen in her mouth writing on a board has surfaced on social media.

Despite having no arms to write on a white board while teaching, madam Enyonam is seen holding the tip of a marker with her mouth to write.

This effort, regardless of the herculean challenge has many lauding the teacher for surmounting the difficulty to transfer knowledge to her pupils

The powerful message the teacher conveys goes beyond the classroom.

Teacher Enyonam is also teaching her pupils about how to be leaders, move out of their comfort zones and beat down the difficulties in life to become winners.

After all, what one does can only become visible when they dare to be extraordinarily different.

Enyonam defines true resilience in the face of an obvious challenge.

Also powerful, is the message that there are still people who have not checked out of the system; people who are willing to shape minds and paradigms regardless of the daunting challenges present.

Hopefully, more people would be encouraged to look beyond what ever incapacitates them to impact society positively.

Photo: The Awesome Prewedding Photo Of This Physically-challenged Couple Will Melt...