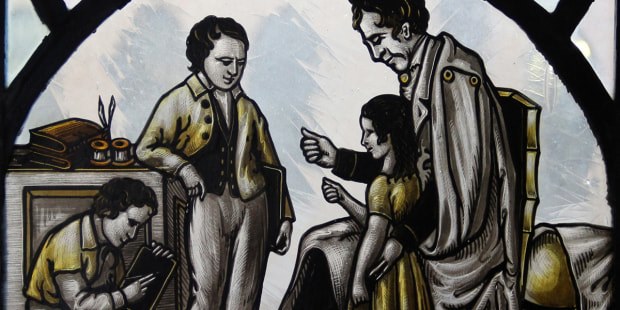 There is a rich history of Catholic priests being involved in efforts to help the deaf understand and the speech-impaired communicate.

Even the developer of American Sign Language studied under a priest.

When Pedro Ponce de León, a 16th-century Spanish Benedictine monk, began working to help the deaf-mute communicate, he was working against a millennia-old assumption: it was believed that language could only be learned by hearing the spoken word.

“Ancient Greek philosopher Aristotle, for example, asserted that ‘Men that are deaf are in all cases also dumb,’” National Geographic writes. “Under Roman law people who were born deaf were denied the right to sign a will as they were ‘presumed to understand nothing; because it is not possible that they have been able to learn to read or write.’”

Ponce de León wasn’t entirely original in his work, it must be said. Native Americans used hand gestures to communicate with other tribes and to facilitate trade with Europeans, National Geographic points out. And Benedictine monks had used them to convey messages during their daily periods of silence.

But Ponce de León adapted the gestures used in his monastery to “create a method for teaching the deaf to communicate, paving the way for systems now used all over the world,” the magazine says.

Juan Pablo Bonet, a Spanish priest and linguist. In 1620 he published the first surviving work on the education of people with a hearing disability. “Bonet proposed that deaf people learn to pronounce words and progressively construct meaningful phrases,” National Geographic says. “The first step in this process was what he called the demonstrative alphabet, a manual system in which the right hand made shapes to represent each letter. This alphabet, very similar to the modern sign language alphabet, was based on the Aretina score, a system of musical notation created by Guido Aretinus, an Italian monk in the Middle Ages, to help singers sight-read music. The deaf person would learn to associate each letter of the alphabet with a phonetic sound. Bonet’s approach combined oralism—using sounds to communicate—with sign language.”

Charles-Michel de l’Épée, a French Catholic priest. In 1755, he established a more comprehensive method for educating the deaf, which culminated in the founding of the first public school for deaf children, the National Institute for Deaf-Mutes in Paris.

“Students came to the institute from all over France, bringing signs they had used to communicate with at home,” says the magazine. ‘Épée adapted these signs and added his own manual alphabet, creating a signing dictionary. Insistent that sign language needed to be a complete language, his system was complex enough to express prepositions, conjunctions, and other grammatical elements. Épée is known as the father of the deaf for his work and his establishment of 21 schools.”

Thomas Hopkins Gallaudet, a minister from Connecticut. When Gallaudet wanted to teach his nine-year-old, hearing-impaired neighbor to communicate, he went to France to train under Épée’s successor, Abbé Sicard. Three years later, in 1817, Gallaudet established the American School for the Deaf in his hometown of Hartford, Connecticut. “Students from across the United States attended, and just as at Épée’s school, they brought signs they used to communicate with at home,” National Geographic says. “American Sign Language became a combination of these signs and those from French Sign Language.

One cannot but wonder if these men were inspired by Jesus’ healing of the deaf-mute man, as well as their hope that all would be able to receive the Gospel message.