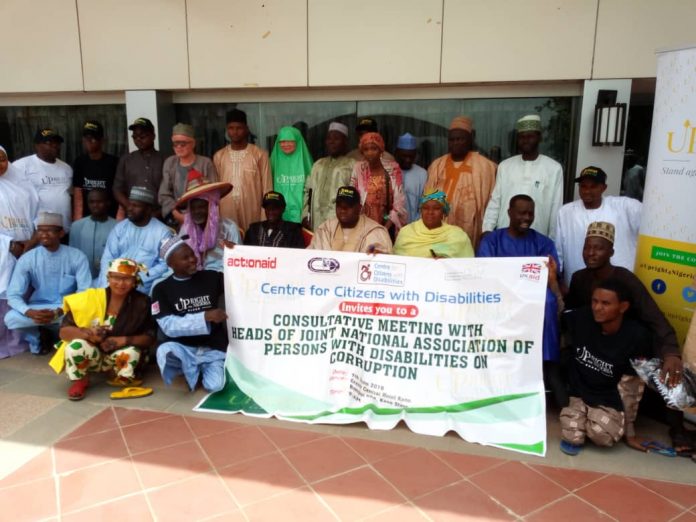 The Centre for Citizens with Disabilities (CCD) has extended her consultations with organizations of persons with disabilities in the North-West geo-political zone for conscription into anti-corruption fight through #UpRight4Nigeria; Stand against Corruption Campaign to Kaduna State.  The Campaign which is being implemented through a UKAid funded project on Strengthening Citizens Resistance against Prevalence of Corruption (SCRAP-C) is aimed at contributing to a reduction in corruption as a result of changing public attitudes that increasingly disapprove of corrupt activities.

In his opening remark by the Executive Director, Centre for Citizens with Disabilities (CCD) Mr. David O. Anyaele ably represented by the Senior Program Officer, Mr. Kola Ogunbiyi commended organizations of persons with disabilities in Nigeria and Kaduna State in particular for their interest and commitment in the fight against corruption in our society, which has been demonstrated by the turnout of heads of PWDs organization present at the Consultative meeting particularly when millions of Nigerians are home as a result of the public holiday declared by the Federal Government to commemorate democracy day in Nigeria.

Mr. Anyaele further stated that CCD is committed to strengthening the capacity of organizations of persons with disabilities in Nigeria to contribute to the fight against corruption in Nigeria. This, according to him informed the project, which is currently running in South East-Enugu State, South South- Akwa Ibom State, North-West Kano State and Kaduna State as the project will also be lunched among organizations of persons with disabilities in South West- Lagos State.  Kaduna State is considered as very key in North-West and the entire northern region hence the importance of brining the project to Kaduna State.

The Executive Director, CCD encouraged the participants to make their voices heard on the fight against corruption as they are the most hit by the effect of corruption in our society; the disability of some of them today was as a result of corruption as resource meant for healthcare services has been diverted for personal use by persons in authority.

While expressing worries on how corruption is being fought now by the government, Mr. Anyaele called on persons with disabilities to join forces with other relevant CSOs to speak against corruption, and engage in campaign activities to promote anti-corruption in our society.  He also encourage the participants to stand against corruption through refusal to participate in corrupt practices; refuse to give or take bribe, gratification before carrying out services; to uphold the value of honesty, integrity, transparency and hardwork.  He further encourages the participants to leverage on Disability Act to demand accountability from policy makers as a means to mitigate corruption in our society.

The consultative meeting had in attendance heads of all cluster groups in the State including the leadership of the Joint National Associations of Persons with Disabilities (JONAPWD) Kaduna State chapter and the media.

On his part, JONAPWD Chairman in Kaduna State, Suleiman Abdulazeez expresses the appreciation of the disability community for considering Kaduna State as one of the focal state for the project.  Corruption is endemic and has eaten deep into the system with negative effect on persons with disabilities he said.

While the participants agreed on strategies to be adopted in engaging state and non-state actors in combating corruption in the state, they also made commitment in ensuring that the strategies are fully implemented in Kaduna State.

RedAid Nigeria partners with Enugu state government and others to provide...