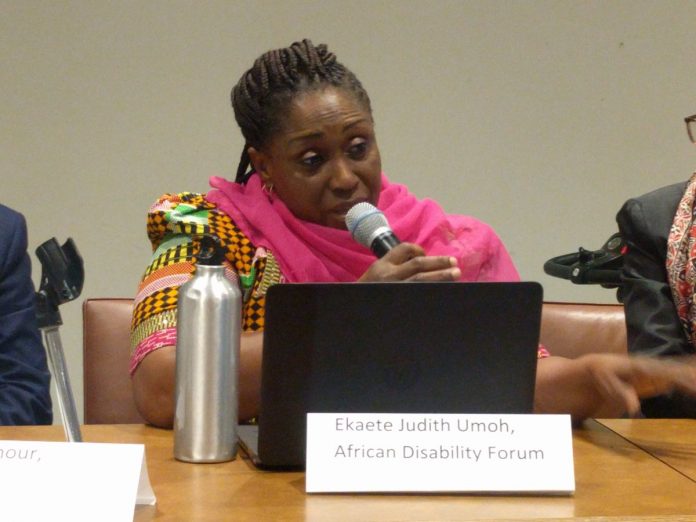 The governance crisis rocking the Joint National Association of Persons with Disabilities (JONAPWD) following the failed election of November 2018 is taken a woeful turn on the image of the organization as well as its international donor partners.

On Thursday, May 2, 2019 the world bank in a bid to organize programs for stakeholders of the disability community was caught in the web of confusion and regret with the aggravated crisis they met on ground. The world bank team preparatory to their coming had been consulting with Ms Ekaette Umoh – a factional leader of the organization who gave the world bank team an impression that all was well in the community. Obviously the existence of Court Order earlier obtained stopping the said Ms Ekaette Umoh from parading herself as President of the organization was concealed from the development partner. On the morning of the program, the world bank team was alerted to the existence of dire circumstances in the affairs of the the organization by the Board of Trustees. This revelation came as a rude shock to the world bank team. The situation was further aggravated by members of the organization who turned out in their numbers outside the venue of the program armed with placards in protest of what they perceived to be prejudice by the world bank team in dealing with one factional leader over the other. Members alleged that towards the election of JONAPWD in 2018 the world bank team was instigated by Ekaette Umoh (whose tenure of office has since elapsed at that time) to organize an event in Nigeria which became a forum for her to carry out her campaign activities. Members alleged that Series of meetings with voters and their leaders held at that event. The money members got from that program became an inducement for the poor and gullible voters in favour of Ekaette Umoh. Now the case is in court and despite been ordered by the court for her to stop acting as President of the organization, the world bank team continued to deal with Ekaette Umoh until the bubble bursted on the fateful day of Thursday, May 2, 2018.  Members proved their grievances by showing that all the attendees were staunch supporters of the Ekaette Umoh led camp including the cluster heads who according them constituted the Electoral Committee that rigged the election in November 2018 before they were caught red handed leading to cancellation of the election.

In the midst of the confusion and sad turn of event, the world bank team asked Ms Ekaette Umoh to excuse herself from the meeting but she declined blatantly and persistently. She insists that she was not attending the world bank event under the aegis of JONAPWD but as leader of her own NGO. This argument was refuted by factional members present considering that she supplied the world bank team with list of the attendees.

Meanwhile the Board of Trustees in their protest letter informed the world bank team that the Federal Ministry of Women Affairs and Social Development – which is the government supervisory agency of the JONAPWD, and who observed the election had issued communication denouncing recognition of any of the factional leaders and urging the world bank team to do proper background checks rather than rely on reports of desperate impostors who meant to mislead and embarrass the world body.

It was gathered that Washington was grievously mad at this event and ordered a call off of the event until further notice.