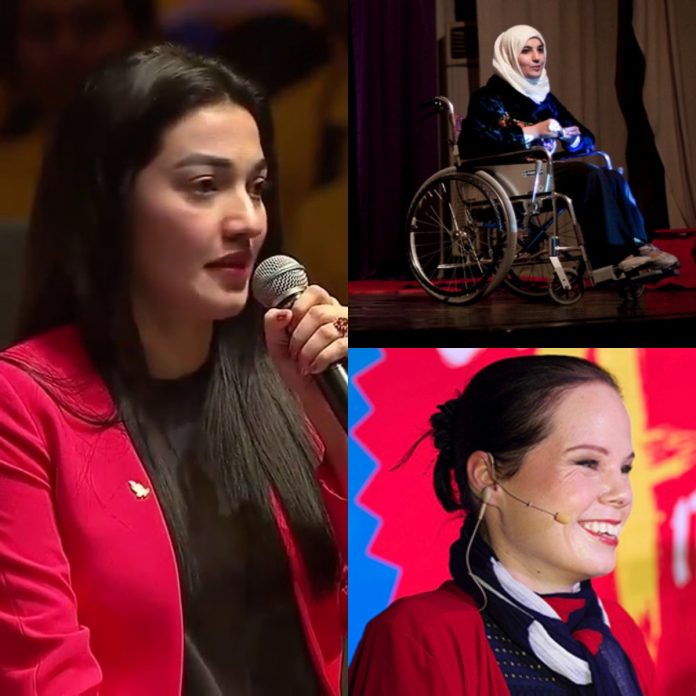 In honor of Women’s History Month, INN joins the world in honoring black disabled women who have had a powerful impact, courtesy of sdaction.org. These women will inspire you to struggle on in spite of any obstacles self-imposed or societalisms. Their work has left a legacy of bridge-building, radical self-love and advocacy we all strive for.

Harriet Tubman (1820-1913) is known for her work in helping blacks escape from slavery in the South to freedom in the North. As a teenager, she was hit in the head with a weight that was hurled at another slave and developed epilepsy, which caused seizures, headaches, and visions. Some say she also had narcolepsy. She was very short (5 feet tall) and considered disabled by slave owners, which may have made her seem an unlikely reason for slaves escaping.

Claudia Gordon currently serves as an adviser on disability issues to President Obama, in the White House Office of Public Engagement. She is the first Black Deaf lawyer in the U.S. and the first deaf student to graduate from American University’s law school. She has advocated for deaf and disabled people through work at the National Council on Disability, Homeland Security (where she worked on emergency preparedness for people with disabilities), and the National Coalition for Disability Rights.

Barbara Jordan (1936-1996) became the first African-American to serve in the Texas Senate in 1967, and in 1973 she became the first African-American woman from a Southern state to serve in Congress. She was also the first black woman to give the keynote address at a Democratic National Convention. She had multiple sclerosis (MS). She worked for voting rights and minimum wage laws, and was considered a leader in the civil rights movement.

Sylvia Walker (1937-2004) was Director of the Center for Disability and Socioeconomic Policy Studies and the Howard University Research and Training Center. She served as Vice-Chair of the President’s Committee’s on the Employment of People with Disabilities. She was a champion for disability rights and her research helped lead to the Americans with Disabilities Act.

Betty Williams is a former president of Self Advocates Becoming Empowered (SABE), an organization of people with intellectual/developmental disabilities. She has served as president of People First of Indiana and has coordinated consumer education and training with the Arc of Indiana.

Fannie Lou Hamer (1917-1977) was a civil rights activist who helped African-Americans register to vote and co-founded the Mississippi Freedom Democratic Party. She was involved in the Student Nonviolent Coordinating Committee. Like many poor blacks at that time, she was sterilized without her knowledge or consent. Hamer had polio as a child. She protested in the face of heavy opposition and was beaten in a Mississippi jailhouse, which caused kidney damage and a limp. She is known for saying, “I am sick and tired of being sick and tired!”

Jazzie Collins (1958-2013) was a powerful San Francisco black transgender activist who fought for the rights of seniors, people with disabilities, LGBT people, and people of color. She served on San Francisco’s first LGBT Aging Policy Task Force and was active with our very own Senior and Disability Action, and previously Senior Action Network.

Audre Lorde (1934-1992) defined herself as a Black Lesbian Feminist Mother Warrior Poet. She wrote Sister Outsider, The Cancer Journals and several other works of poetry and prose. When she underwent a mastectomy for breast cancer she refused to wear a prosthesis stating, “Either I love my body one-breasted now, or remain forever alien to myself.”

Lois Curtis is a black artist and activist with a mental health disability and intellectual/developmental disability. During her childhood and early adulthood, she lived in state-run institutions, and her requests to live in the community were repeatedly denied. She sued the state of Georgia, and her case went to the Supreme Court. In the now-famous L.C. v. Olmstead decision, the Court declared that Curtis and other people with disabilities have a right to live in the community and to be provided adequate supports. The Court said the unnecessary institutionalization is a form of segregation and is illegal under the Americans with Disabilities Act. Curtis now lives in the community.

Johnnie Lacy (1937-2010) was a leader in the independent living movement and fought for the rights of people with disabilities, especially people of color. She led Community Resources for Independent Living, a nonprofit in Hayward providing services and advocacy. Lacy spoke of being excluded from the Black community due to her disability and from the disability community due to being a person of color. As a Black woman in a wheelchair, she educated her communities about race and disability and served as a role model for many other Black disabled women.

Dr. Nathie Marbury (1944-2013) was the first Black deaf woman to enter the National Leadership Training Program for the Deaf at California State University, Northridge and the first Black deaf female teacher at the Kendall Demonstration Elementary School for the Deaf in Washington, DC. Through teaching and advocacy, she shared her passion for American Sign Language and Deaf culture.

Pat Parker (1944-1989) was a Black lesbian feminist poet with breast cancer. She wrote about identity and pride. She was involved with the Black Panther Party, the Women’s Press Collective, and gay and lesbian organizing.
In one of her poetic works she wrote;

‘If I could take all my parts with me when I go somewhere, and not have to say to one of them, “No, you stay home tonight, you won’t be welcome,” because I’m going to an all-white party where I can be gay, but not Black. Or I’m going to a Black poetry reading, and half the poets are antihomosexual, or thousands of situations where something of what I am cannot come with me. The day all the different parts of me can come along, we would have what I would call a revolution. – Movement in Black, by Pat Parker

Hydeia Broadbent (born in 1984) is an HIV/AIDS humanitarian and activist. She was born with HIV. During her childhood in the 80s and 90s, she spoke about how she was stigmatized and ostracized for having AIDS. “Her testimony shattered ignorance concerning what HIV/AIDS ‘looked like’ during a time when fear and misunderstandings still dominated society’s consciousness.” An activist by the age of 6, she identifies as the first African-American youth to speak out about HIV/AIDS.

Dr. Maya Angelou (1928-2014) is known for her incredible writing, such as I Know Why the Caged Bird Sings. A little known fact about Maya Angelou is that she had selective mutism. As a child she was abused and sexually assaulted by her mother’s boyfriend, and when she spoke up, he was convicted, released, and then found dead. The fear that her voice could be used for harm…triggered a period of selective mutism.

Selective mutism is a form of anxiety disorder marked by a child’s discomfort in speaking in certain environments or situations. In Maya’s case, she refused to utter a word for five years. Though the source of her selective mutism was devastating, it was the silent years where her admiration for books and literature grew; and skillful listening, observing, and memorizing abilities flourished. … Maya’s sharing of her experience with selective mutism displayed that speaking and silence are compelling actions within their own rights. “Neither is weaker or stronger than the other; both can be used to make a statement that grips us long after the moment is over.”, she wrote.

Have your say here…

The Rise Of The Sadiya Umar Farouq Brand, By Raheem Akingbolu

Fayemi rewards man who took his son to isolation centre after...