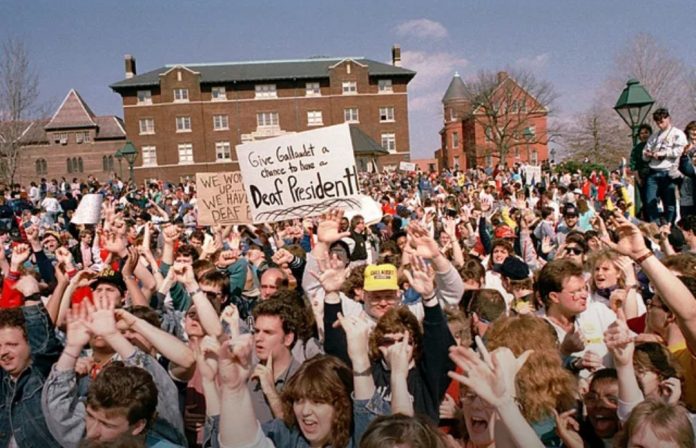 Students at Gallaudet University, the renowned school for the deaf, seek more progress as it remembers the uprising which brought the campus in the nation’s capital to a standstill 30 years ago during a week-long protest to demand a “deaf president now.”, INN report from source

The protest forever changed Gallaudet and inspired the deaf community, but students, alumni and experts say more is still needed three decades later to boost the number of deaf leaders and jobs.

INN gathered that less than 40% of people who are deaf or hard of hearing in the U.S. were employed full time in 2016, according to Cornell University’s Institute on Employment and Disability.

Chris Soukup, who graduated from Gallaudet in 2001 and is now CEO of the nonprofit Communication Service for the Deaf, estimated around 70% of people who are deaf do not work or are underemployed.

INN also learnt that in some cases, asking for an interpreter for a job interview can turn employers away from a deaf candidate, said Soukup, whose group provides services and technology for the deaf community.

Recalling the protest of  three decades ago, the matter came to a head on March 6,1988, when Gallaudet’s board of trustees named Elisabeth Zinser as the next president. Zinser was the only hearing candidate among the three finalists, and she did not know sign language. A majority of the board could hear.

Greg Hlibok, 50, who was a junior and protest organizer at the time, said students thought the board refused to select a deaf president because of a “paternalistic” attitude toward the deaf community on campus.

“We all felt a deaf president had to be our leader,” he recalled.

The students expanded their protest over Zinser’s appointment beyond campus by marching to the U.S. Capitol three times and gaining national attention. Hlibok appeared on ABC’s Nightline alongside Zinser and deaf actress Marlee Matlin.

INN also learnt that after a week of protests, the university caved to the student demands. Zinser announced her resignation, and Gallaudet named its first deaf president King Jordan.

The watershed event known as the Deaf President Now movement gave confidence to people who are deaf, said Hlibok, who now sits on the university’s board of trustees. Every Gallaudet president since Jordan has also been deaf.

It also raised awareness of deaf issues for the hearing world and paved new employment opportunities for those who are deaf. And two years after the protest, the Americans with Disabilities Act became law.

For Hlibok, who was discouraged as a child from becoming a lawyer, the protest inspired him to pursue his dream career. He graduated from Hofstra Law School in 1994.

Ryan Maliszewski, who runs Gallaudet’s Innovation and Entrepreneurship Institute said that students today don’t need wait for another protest like 1988 to create opportunities for leadership in the deaf community.

The institute brings in business owners and leaders — both deaf and hearing — to mentor students and share examples of their success. Maliszewski said the institute serves as a “springboard” to help students launch their business ideas and create new paths for success.

“It’s no secret that having a full entrepreneurship program at Gallaudet is something that the deaf community has been waiting for for a long time,” Maliszewski said.

“We are now providing the necessary framework and building blocks to see actual results that create self-employment opportunities.”

He also explained that the institute provides students with hands-on experience running their own businesses, in some cases even while they’re undergraduates.

Soukup, through his group, also supports deaf-owned businesses, saying they can serve as an economic engine in the community, INN learnt

“It’s very important that it’s not just deaf people helping deaf people,” Soukup said. “It’s about deaf people making a meaningful contribution to the world, and the world recognizing that.”

On his part, Gunner Woodall, a senior at Gallaudet from Illinois who wants to run for Congress someday, summed it up: “I want to see more deaf people involved in the hearing world to show hearing people that, ‘yes, we’re the same. We can do the same things.’”

Its Cinema Time for the Disabled: DRAC Introduces the Movie “In...

An African’s View of America, Its Roles and the Future of...