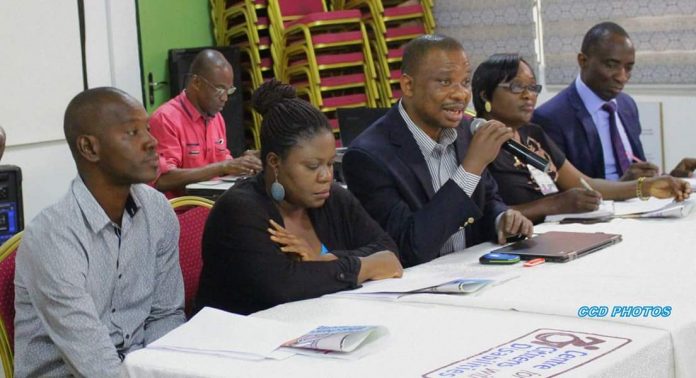 The Centre for Citizens with Disabilities, CCD, has applauded the National Assembly for the passage of the Discrimination against Persons with Disabilities (Prohibition) Bill, 2018 (SB. 22) also known as the Nigeria Disability Bill into Law, making it the fourth time the bill will be passed at the hallowed chambers, INN reports from source.

This was contained in a Press Release signed by the Executive Director of CCD, Mr. David Anyaele, and made available to Newsmen in Lagos on Wednesday, March 28, 2018.

Anyeale, who lauded the adoption of Joint Conference Committee Report on the bill, specifically thanked Senator Francis Alimikhena and Hon. Ochiglegor Idagbo for sponsoring the bill at both Chambers of the National Assembly. He also commended the leadership of both chambers of the National Assembly- Sen. Bukola Saraki, and Rt. Hon. Yakubu Dogara for fulfilling the promises they made to the Centre for Citizens with Disabilities to ensure that the bill is passed.

INN gathered that this latest adoption, according to Mr. Anyaele, followed the Joint Conference Report on the bill presented at House of Representatives by Hon. E.Y. Orker-Jev on March 15, 2018, and also presented at the Senate, on March 27, 2018 by Sen. Obinna Ogba.

The Statement also contain words of praises for the Media, Organizations of Persons with Disabilities, Staff of the National Assembly as well as the Centre’s Partner- Open Society Initiatives for West Africa (OSIWA), for following up on the bill till date, INN learnt.

While appealing to the Clerk of the National Assembly to transmit the bill to the President for assent without delay, Mr. Anyaele, called on the President to assent to the bill.
According to him, the passage of the bill will go a step further in validating the Ruling Party’s stance in promoting an all-inclusive society. He noted with satisfaction that the present administration is the first to appoint at the National Level, Senior Special Assistant and Special Assistant on Disability Affairs since the inception of the country.

Anyeale also noted that the bill is in consonance with the United Nations Convention on the Rights of Persons with Disabilities which Nigeria is signatory to, INN learnt.

It may interest you to know that the bill contains provisions that will ensure people living with disability in Nigeria are protected against discrimination and harmful practices. The bill also provides for rights of persons with disabilities to have access to public premises, accessibility aids at public building, access to road and sidewalk, protection at situation of risk and humanitarian emergencies, prohibition of use of persons with disabilities to solicit for alms. Also, the law provides for the right to free education, right to free healthcare, prohibition of segregation, right to work and employment, provision of special communication at hospitals, right to participation in politics, and a National Commission to address complaints of harassment, discrimination and harmful practices against persons with disabilities, amongst others.

CCD Celebrates 100 Days Of Assent To Disability Law, Calls For...