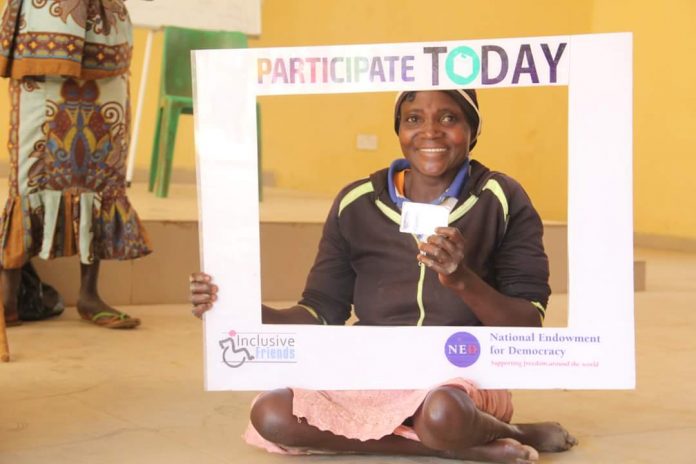 The Inclusive Friends Association (IFA) have task women with disabilities to be proactive on political and electoral matters. It said this at an organized forum at Riyom LGA of Plateau State, INN reports

In a facebook post share on it’s page, IFA carried out a Voter Education Forum for women with disabilities. The forum stressed on the need to maintain a proactive attitude in Nigeria’s political and electoral processes.

The Executive Director of IFA, Grace Jerry, reiterated the reason why all participants should obtain a voter card.  She stated that the vioter card is their power without which their voices can’t be heard.

Participants were thankful for the enlightening opportunity and made a commitment to make a difference.

Conscious of the voting rights of every citizen of Nigeria, the Independent National Electoral Commission (INEC), convened a one-day workshop in Keffi, Nassarawa State, to review and adopt a Framework on Access and Participation of Persons Living with Disabilities (PWDs) in the Electoral Process ahead 2019 General Elections.

Declaring the workshop open, the National Commissioner and Chairman, Outreach and Partnership Committee of INEC, Dr Adekunle L Ogunmola restated the commitment of INEC towards mainstreaming the PWDs in electoral matters. He said “the Commission aims to ensure that disability issues are mainstreamed into electoral matters, more so against the backdrop of the fact that, the 2011 World Health Organization report on disability estimates that fifteen percent of the world’s population have one disability or the other, and 80% with disabilities live in the global south”.

Dr Ogunmola also cited the statistics of PWDs in Nigeria which he said stood at well over 25 million men, women and children, of various age groups.
Speaking on the experience of INEC at the development of a durable and acceptable PWD Framework, Dr Ogunmola said time, knowledge, expertise and consultation were necessary, adding that “the first input to the draft came up based on consultation with PWDs groups”.

The Commissioner also added that “Nationwide consultations have taken place with principal external stakeholders” in which an acceptable template was developed. Dr Ogunmola further said the content and direction of INEC PWD Framework was guided by the national and international instruments on PWD issues, which include; the United Nations Declaration of Human Rights (1948); International Covenant on Economic, Social and Cultural Rights (1956); International Covenant on Civil and Political Rights (1966) among other things; as well as the Constitution of the Federal Republic of Nigeria 1999 (as amended) and the Electoral Act 2010 {as amended)

In her own remark, the Deputy Director and Head of CAIVIL Society Organizations, Dorothy Bello, said the workshop was aimed at providing yet another opportunity for the higher cadre of Commission’s staff to make inputs into the draft policy with a view to improving its contents.
Mrs Bello was also optimistic that participants would appreciate the importance of the Framework, take ownership and adopt it for planning and future engagement with PWDs.

Earlier in his welcome address, the INEC Administrative Secretary, Nassarawa State, Engr. Emmanuel Akem expressed delight over the hosting of the workshop in Nassarawa State and thanked INEC for responding to the consistent advocacy for greater participation of the PWDs in the electoral process.