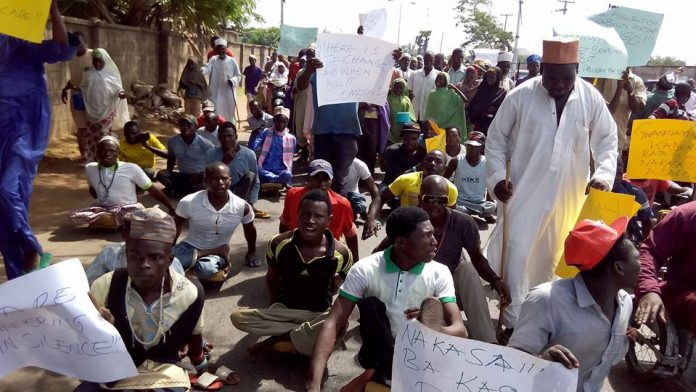 A  supposed abandonment of persons with disablity by the Akwa Ibom State Government, over the years, has occasioned a no love lost relationship between Akwa Ibom Persons Living with Disabilities, APLWD, and their leaders, with irate members attacking their leaders for allegedly doing a deal with government to stifle their demands.

According to source, INN  learned that the state government abruptly terminated scholarship programme and impress for the disabled and efforts by APLWD leaders to get the ears of the state governor, Emmanuel Udom, to redress the matter, have yielded no result, while irate members were venting their displeasure on them. Also according to source, Members lamented their non-inclusion and recognition in the scheme of things in the state, notwithstanding their participation in every electoral process, support and loyalty to the government in power.

A leader of the association, who confirmed the termination of the scholarship scheme and impress for the disabled by the state government, stated: “The last time the scholarship was paid was in 2012. The impress was stopped since 2015. So many persons with disabilities have withdrawn from school.”

“Our members are aggrieved; in fact, some members are even attacking us that we collected money from government, which is why we do not speak out,” he said.

His words: “This government has so many Personal Assistants, PAs, and Special Advisers, SAs. They even appoint SA to the Governor for Traders and all that, but we endorsed Governor Emmanuel Udom before 2015 at the Summit Complex Udoumana Avenue, yet the governor did not deem it fit to appoint any of us as SA on Disability Matters, not even a Personal Assistant .So we want the governor to look into our plight”.

We never gave in – Leader

Another leader, who also preferred anonymity, added: “The truth is that we did not compromise with government and we want the government to act quickly on our demands to restore the scholarship scheme and impress.”

“Is it the government that refused to see us that bribed us not to speak out, you can see our dilemma.” he added.

According to him, “Though it was not a physical attack, the student’s body had wanted to embark on a protest on two different occasions over the scholarship that was stopped and the leaders said no because government will think that somebody sponsored them to do that. Some members misinterpreted it that they (leaders) have been compromised.”

Many have withdrawn from schools –Inyang

A member of APLWD, who simply identified himself as Inyang, wondered why past and current governments always neglect them when it comes to appointments and empowerments, adding that many of them were surviving by the mercy of God. Inyang especially expressed concern that even some of them, who got admission recently into the University had to withdraw because of lack of sponsors, as the state government stopped the scholarship programme used to assist them in higher academic pursuit.

“There used to be a scholarship scheme that was a lifeline for our members. And many of us benefited from the scheme, which is only for higher education. But the scholarship programme has been stopped over five years ago and the state government has not told us why it stopped the scheme meant for Persons Living with Disabilities,” he said.

“The leaders of our associations made us to know that since this government came into office in 2015, it has also stopped. So many of us are suffering, in fact, recently, one of our members who got University admission, last year, came to me for financial help. He could not pay the acceptance fee because the woman, who promised to sponsor him in the university, died within the period. It is frustrating.” “The scholarship would have helped him.”

So many of us benefitted from it even up to Masters Level, government was paying N100,000 for Arts- oriented courses yearly, N120,000 for Science courses and Masters programme N150,000,” he said.

Similarly, an amputee, Mr.Uduak expressed concern that since the history of creation of Akwa Ibom state, no governor had interacted with them as an association or considered them for any political appointment, adding that any disabled person appointed by government was not selected from their association.

“I listened to Governor Udom Emmanuel when he was being interviewed on a Radio Station in the build up to the 2015 election and one of us had asked him how was going to carry Akwa Ibom people with disabilities along, and he said he would tap from our wealth of experience if he eventually emerged as governor,” he said.

Regardless of our support, Udom yet to meet us Uduak asserted: “And we even endorsed him at Sam Law Hotel through our association, yet since the governor came into office, he does not see the need to meet with us.”

“In fact, since the creation of Akwa Ibom, 30 years ago, no governor had interacted face- to -face with persons with Disability.

We do not know whether they think that disability is contagious.

“Even during the last administration of Governor Godswill Akpabio, we had presented award to him through the wife expecting that he would meet with us, but he never did. But he met with many other groups like market women, traders associations, and even the Muslim group in the state.

“We were the only association that was forgotten. Let them tell us why no Akwa Ibom state governor has had on face to face interaction with persons with disabilities.

Are we only good for use as instrument for public show?” He said.

Commissioner of Women Affairs and Social Welfare, Dr.Glory Edet, could not be reached for comments, as she neither responded to calls nor text messages to her phone.