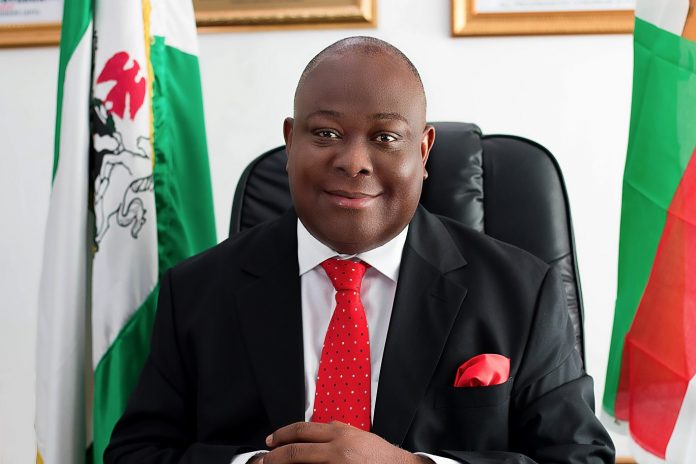 Chairman of Kpakpando Foundation, Senator Osita Izunaso, has described his choice as The Sun Humanitarian Service Award winner for 2017 as a huge surprise that will spur him to do more for the physically challenged in Nigeria, INN reports.

Izunaso will formally receive the award alongside 21 others at the prestigious The Sun Awards holding on February 24, 2018, at the Convention Centre, Eko Hotels & Suites, Victoria Island, Lagos.

Speaking in Abuja yesterday while receiving a delegation from The Sun led by the Managing Director/Editor-in-Chief, Mr. Eric Osagie, who came to officially inform him of his selection, Izunaso said he was particularly excited about the recognition not just on the grounds of the popularity of The Sun Awards but also on the fact that nobody contacted him until the award was announced.

He said: “On behalf of Kpakpando Foundation, I want to thank The Sun Newspaper for this honour. It came as a pleasant surprise as nobody called to tell me about the award until it was formally announced. The honour will propel us to do more for people living with disability.”

Izunaso said his foundation was eagerly waiting for the National Assembly to pass the bill seeking to establish a commission that would cater for the wellbeing of the physically challenged Nigerians.

He also made strong case for physically challenged people, saying they needed more attention and support than currently given by government and Nigerians.

Earlier, Osagie explained that the Board of Editors of The Sun voted Izunaso, who is also the National Social Organising Secretary of the All Progressives Congress (APC), for the honour because of the legacies of his foundation in promoting the well being of persons living with disability.

The MD said: “The Sun Board of Editors cast its lots for you in recognition of your extraordinary legacies of philanthropy to the Nigerian society.

“Through your charitable organisation, Kpakpando Foundation for the Physically Challenged Persons (KFPCP), established on October 30, 2006, you have consistently catered for thousands of less privileged Nigerians. Your journey into politics is part of your vision to serve humanity.”

Listing Izunaso’s humanitarian gestures, Osagie said: “With over 1,000 scholarships, 20,000 units of wheel chairs, 1,000 motorised wheelchairs, computers/laptops, 5,000 units of grinding machines, 12,000 units of crutches, 10,000 sewing machines, 8,000 mobile phones, 200 units of Braille machines, 3,000 generators, Keke tricyles and 200 established business centres, among others, to Persons Living with Disabilities (PWDs), Kpakpando Foundation has, indeed, shown that it is committed to the wellbeing of PWDs.

“Across different parts of the country, your Foundation has intervened in picking hospital bills of some PWDs who face life-threatening ailments. Apart from that, many poor Nigerians have had their education and vocational trainings funded by the foundation.”

Osagie further noted: “Certainly, you have, through the humanitarian works of Kpakpando, touched lives and made your name a sing-song in thousands of homes in Nigeria. This distinct quality makes you a worthy and deserving recipient of The Sun Humanitarian Award 2017.”

He said the humanitarian award category of The Sun Awards recognises “Nigerians with proven record of exceptional humanitarian endeavours to improve the human condition through saving lives, improving the quality of life, and alleviating suffering, while supporting and contributing to the basic human dignity as well as rights.”.

Meet The Blind Man Who Has Been Selling Coconut For The...