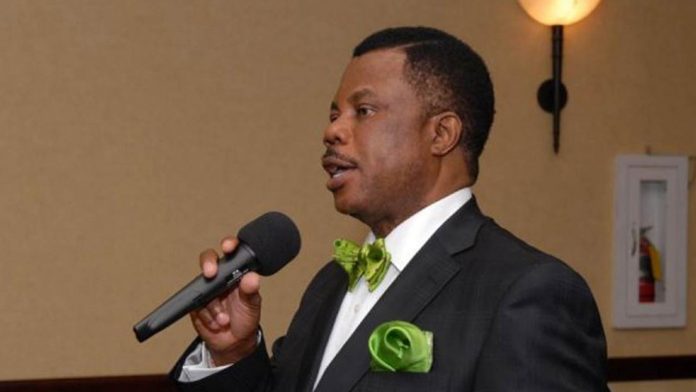 Gov. Willie Obiano of Anambra has bagged the “2017 Eastern State and Nigerian Governor of the Year Award’’ of the Nigerian-American with Disabilities in the Diaspora and their Public-Private Partners (P3), INN Reports

Chief Eric Ndubueze Ufom, President of Houston, Texas-based Equal Rights for Persons with Disabilities International (ERPDI), Incorporated in the U.S. made the disclosure in a statement on Wednesday in Lagos.

Gov. Obiano was chosen for the award by the group after a “massive 2014 to 2017 performance evaluation of the 36 Nigerian state governors, including the Minister of Federal Capital Territory’s works”.

“Today (Jan. 8), we the Nigerian-American with Disabilities in the Diaspora and our Public-Private Partners (P3), chooses, Governor Willie Obiano of Anambra State, as our 2014-2017 Eastern State and Nigerian Governor of the Year,’’ Ufom disclosed.

“They were assessed based on works on Nigeria’s disability-inclusive and accessible urban/city developments (building of the first Silicon Valley of Nigeria at Anambra State), progress, peace and unity, economic, trade and industrial developments…”, Said Ufom

INN discovered that other areas of the assessment are agricultural developments, social, human, security, democracy and governance, electoral and political, entrepreneurship, job training and placements and implementation of the UN Convention on the Rights of persons with disabilities.

The group said Obiano, broke all records because on Nov. 20, 2017, within less than 48 hours after winning his re-election that took place on Nov. 18, 2017 and also, within 24 hours after he was issued with his re-election Certificate by INEC, he wasted no time to moving into positive actions.

The governor also introduced The “Willie Obiano’s Silicon Valley of Nigeria’’ a new rural development paradigm and the inclusion and sustainable new community model inspired by the Saemaul Undong Institute.

INN discovered that other african countries, including Lake Chad Basin Nations, Republic du Niger, Chad and Cameroon, have their headquarters at Enugwu-Ukwu General Hospital, Njikoka Local Government Area, Anambra, as the first projects to be built at the Silicon Valley.

The statement said that the diplomatic meeting where the history was made took place during the UN Africa Industrialisation Day, at the UNDP-Nigeria’s headquarters, Abuja, during a meeting between Anambra, Plateau, Benue, Equal Rights for Persons with Disabilities International, (ERPDI) Incorporated and other Government/public-private Partners (P3), with the UNDP-Nigeria’s Country Director, Dr Samuel Bwalya, INN observed.

Blind Youth Corper Gives Back To The Society With A Large...